Email ThisBlogThis!Share to TwitterShare to FacebookShare to Pinterest
Labels: Vortex

Several gigantic gaseous planets have been spotted orbiting distant stars, but Planet Gliese 581 e could be the lightest planet outside our Solar System ever detected. Located 20.5 light years away from us, it's 1.9 times the mass of Earth, indicating there are probably billions of Earth-sized planets revolving around stars throughout the universe.
The only problem with this planet is that it's so close to its star, it would be uninhabitable. However, three other planets revolve around that same star, and scientists say one of them, Gliese 581 d, could be covered by a large and deep ocean. It's situated far enough away from its star to be habitable. The catch with that one: it's seven times more massive than the earth, which would make human explorers feel awfully sluggish.
Read Entire Article
at April 27, 2009

A warming climate will fuel larger, more frequent wildfires in the Sierra Nevada and other parts of the West, and the fires will contribute to climate change, according to a new study.
More than 20 international scientists, in the report published Friday in the journal Science, said fire is not only a consequence of climate change but an important cause.
"Fire also influences the climate system. This is what we call a feedback," Jennifer Balch, a fire expert at the University of California, Santa Barbara, told the Reno Gazette-Journal.
Scientists determined intentional deforestation fires, many set in tropical areas to expand agriculture or ranching, contribute up to a fifth of the human-caused increase in emissions of carbon dioxide, a heat-trapping gas helping to boost global temperatures.
The researchers called on the Intergovernmental Panel on Climate Change to fully integrate fire into its ongoing assessment of climate change.
Fire-climate feedbacks, they said, have been largely absent from global climate models.
"Extraordinary (fires are) occurring like a rash all over the planet," said David Bowman, a forestry and wildlife expert at the University of Tasmania.
Fire of unprecedented ferocity swept across parts of Australia in February, killing about 200 people.
Similar fire activity can be expected elsewhere as the climate warms, including in the Sierra, where a 2007 blaze at Lake Tahoe destroyed 254 homes, scientists said.
"We are witnessing an increasing amount of so-called megafires," said Thomas Swetnam, an expert on fire history and forest ecology at the University of Arizona. "Unfortunately, I think we are going to see more large fires in the western United States. The western United States is in a bull's-eye."
Read Entire Article
at April 27, 2009

Estimating the orbit of Planet X

If Planet X is out there in the icy reaches of the Solar System, we should see its affect on the orbital motion of the inner planets

"Does the Solar System contain undiscovered massive planets or a distant stellar companion of the Sun?" asks Lorenzo Iorio at the Istituto Nazionale di Fisica Nucleare in Pisa, Italy.
If it does, then the orbital period of such a body would be so long that any gravitational influence on the known planets can be thought of as a constant, tiny perturbation.
Iorio has looked at a the perihelion precessions of Venus, Earth and Mars in the last century and asked whether there is any indication of such a force in action.
Apparently not, he says, but that doesn't rule out its presence. Instead, it has allowed Iorio to place limits on how far away such a planet might be.
His conclusion is that if Planet X is out there and about the size of Earth, it must more than 130 AU away. If it is the size of Jupiter, it cannot be closer than 886 AU and if it were a brown dwarf with a mass around 80 times that of Jupiter, it would have to be more than 3800 AU away.
Let's get looking!
at April 18, 2009

On This Day: San Francisco Struck by Devastating Earthquake

by Kate Davey
On April 18, 1906, at 5:12 am, San Francisco experienced what would become known as the worst earthquake in U.S. history. The city was almost entirely destroyed.
1906 Earthquake Destroys San Francisco
The quake struck about 20 minutes before dawn and came in two shocks lasting a little over a minute. In that brief period of time, the quake left much of San Francisco in ruins. Police officer Jessie Cook said the quake sounded like “the roar of the sea.” Henry Powell, a police lieutenant, also thought of the ocean when he said that Valencia Street started to “roll in waves like a rough sea in a squall, but it sank in places and vomited up its car tracks and the tunnels that carried the cables. These lifted themselves out of the pavement, and bent and snapped.”According to the San Francisco Chronicle, the earthquake released the energy of several nuclear bombs. The U.S. Geological Survey reports that the magnitude of the 1906 earthquake was somewhere between 7.7 and 8.3, occurred on the San Andreas Fault and was felt from Oregon to Los Angeles.
Read Entire Article
at April 18, 2009

Key role of forests 'may be lost' 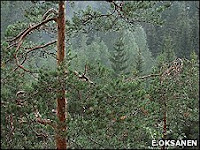 Forests' role as massive carbon sinks is "at risk of being lost entirely", top forestry scientists have warned.

The International Union of Forest Research Organizations (IUFRO) says forests are under increasing degrees of stress as a result of climate change.
Forests could release vast amounts of carbon if temperatures rise 2.5C (4.5F) above pre-industrial levels, it adds.
The findings will be presented at the UN Forum on Forests, which begins on Monday in New York.
Compiled by 35 leading forestry scientists, the report provides what is described as the first global assessment of the ability of forests to adapt to climate change.

Why Have The Beatles Returned to Maharishi?

"He who does not weep over this world does not know this world. Yet letting go of our obsession with perfect happiness can liberate us. It can free us from the distraction of a constant search for an enlightenment that knows no pain."

In accepting filmmaker David Lynch's invitation to play at a benefit concert in New York City's Radio City Music Hall to help fund the teaching of Transcendental Meditation (TM) to a million children, the two surviving mop-tops, Paul McCartney and Ringo Starr, have reunited to reclaim their 1968 spiritual roots.
It was then that the most celebrated rock group in history traveled to India to meditate with Maharishi Mahesh Yogi at his Himalayan ashram in Rishikesh. "Say the word, and you'll be free," John, Paul, George, and Ringo had sung a few years earlier, and eventually the word became a mantra, a Vedic sound given to them by Maharishi and their fellow meditators by TM teachers like myself.
When I first learned to meditate, Maharishi predicted that those who practiced his technique just twice a day for twenty minutes would become enlightened. He approximated that it would take somewhere between five and eight years. I began TM on April 18, 1971, but I didn't start meditating regularly until January 1, 1972. After that, I almost never missed my twice-a-day meditation. And if I did, I usually managed to meditate at least once that day. I stopped using the technique sometime in 2000, nearly twenty years past the maximum eight-year prediction for enlightenment.

"The ice melt of 2007 seemed to confirm Warwick’s fears. Reports since then claim the Arctic ice could be gone by 2013."

For most people, news of the ice melt was little more than a distant curiosity. But for climate scientists it was the scariest thing they had seen yet, and what’s more it had caught them completely by surprise.
In the summer of 2007, a large portion of Arctic Sea ice – about 40 per cent – simply vanished. That wasn’t supposed to happen. At least not yet. As recent as 2004, scientists had predicted it would take another 50 to 100 years for that much ice to melt. Yet here it was happening today.
It raised the question: Had global warming suddenly pressed the gas pedal to the floor? If so, the world was in for quite a climate ride – dramatic, jarring changes in climate much sooner than expected. Climate scientists were deeply worried.
“It really caught the scientific community by surprise,” Professor James Ford, a McGill University geographer and Arctic expert recalled. “The Arctic system is close to crossing the threshold beyond which we will get dramatic changes in climate.”

Swarm of earthquakes dies down but concern lingers

Since the magnitude 4.8 earthquake hit the Salton Sea on March 24 many are wondering if the “Big One” is coming.
The US Geological Survey (USGS) has been busy assessing the initial quake and the more than 300 moderate quakes that followed, and while the activity has died down, the question is: what do the swarm of earthquakes mean to the daddy fault line of them all, the San Andreas?
“We’ve been on the edge of our seats,” said Ken Hudnut, a geophysicist with the USGS when asked about the activity just south of Palm Springs.