FRESNO, Calif. (AP) — Gov. Arnold Schwarzenegger says he wants President Obama to reconsider sending federal disaster aid to help California's drought-stricken communities.
Schwarzenegger petitioned the White House to declare California a major federal disaster area in June, in a bid to get more money for food banks, unemployment assistance and legal services in Fresno County.
Three dry years coupled with restrictions on water pumped from the Sacramento-San Joaquin Delta have cut the irrigation supplies of many San Joaquin Valley farmers and deepened rising unemployment.
As of last week's U.S. Drought Monitor, 43% of the state was listed as being in a severe drought.
Read Entire Article
at August 27, 2009

Conditions in Australia’s most important farming region are the worst on record and are not expected to get better anytime soon. The eight-year-long drought is the worst in a century, ruining crops throughout the Murray-Darling Basin, an area covering 410,000 square miles—the size of France and Spain combined. The basin, which stretches through Queensland, New South Wales, Victoria and South Australia, is considered Australia’s premier farming region, accounting for some 40 percent of the nation’s agricultural production.
Mark Twain once compared the area to America’s Mississippi. But now, Agence France-Presse reports, “Sections of the [Murray] River have become little more than stagnant pools as the drought continues, with banks eroded into crumbling dirt cliffs that leave the roots of gum trees exposed.” One of the river’s paddle boats, the Cumberoona, had to stop operating when water levels became too low three years ago.
Lakes near the Murray’s delta are now below sea level—only man-made barriers stop the sea water flooding in. These lakes are becoming acidic, as the lake bed soils turn into sulfuric acid when exposed to the air. Experts have detected acidity levels higher than battery acid in some of the small streams flowing into these lakes.
Read Entire Article
at August 27, 2009 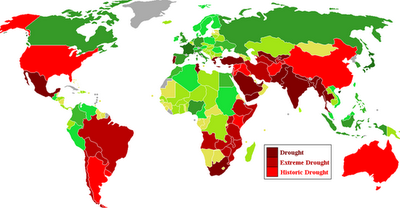 by Eric deCarbonnel
After reading about the droughts in two major agricultural countries, China and Argentina, I decided to research the extent other food producing nations were also experiencing droughts. This project ended up taking a lot longer than I thought. 2009 looks to be a humanitarian disaster around much of the world. To understand the depth of the food Catastrophe that faces the world this year, consider the graphic below depicting countries by USD value of their agricultural output, as of 2006.
The countries that make up two thirds of the world’s agricultural output are experiencing drought conditions. Whether you watch a video of the drought in China, Australia, Africa, South America, or the US, the scene will be the same: misery, ruined crop, and dying cattle.
China
The drought in Northern China, the worst in 50 years, is worsening, and summer harvest is now threatened. The area of affected crops has expanded to 161 million mu (was 141 million last week), and 4.37 million people and 2.1 million livestock are facing drinking water shortage. The scarcity of rain in some parts of the north and central provinces is the worst in recorded history.
Read Entire Article
at August 27, 2009

MOSCOW, (PRIME-TASS) -- Russian Prime Minister Vladimir Putin outlined a plan on Tuesday to aid farmers suffering from the drought.
He was speaking at an official meeting devoted to the agriculture industry.
In particular, Putin instructed the Finance Ministry to consider providing subsidies to regions affected by the drought.
Putin also criticized the Agriculture Ministry and Regional Development Ministry for what he believed were insufficient efforts to promote crop insurance.
The government may increase its subsidies for crop insurance by 1.5 billion rubles this year, compared with the initial plans, Putin said. He said the subsidies were initially projected at 2 billion rubles.
Additionally, Putin suggested prolonging loans provided to grain producers suffering from the drought by up to three years and loans provided to other farmers by nine months.
Read Entire Article
at August 27, 2009

It's not Maryland's weather, but it's important weather news. The deepening drought in Texas, particularly South Texas, is withering rangeland, killing cattle and posing real hardship for ranchers who did not sell off their herds early enough.
"We've had 2 inches of rain in a year's time," said Sammy Gavito, AgriLife Extension agent for Duval County, west of Corpus Christi. "We're about 22 to 23 inches below normal for the year. There isn't enough for them to eat, and it's very hot. We've had almost 50 days in row of almost 100 degrees. That's a record for us down here."
He estimated that the ranchers he spoke with had lost 3 to 5 percent of their herds already, and many of the rest are too skinny to sell at a profit.
at August 27, 2009

"Reality is merely an illusion, albeit a very persistent one."-Albert Einstein

In late October, many luminaries of the nondual community will be gathering in San Rafael, California, at the Science and Nonduality Conference. For those unfamiliar with the term, nonduality is like the final destination for those wanting to uncover the ultimate Socratic quest to "know thyself." Nonduality is the sudden and absolute realization that all perceived separation is entirely illusory, and that, instead, everything that you experience is, quintessentially, only One. To explain this sense of unicity that underlies the multitudinous universe, nondualists often resort to the metaphor of a movie that's being projected on an infinite screen. Even though the characters and the scenery appear to be separate and interactive, the only thing that's really real is the white, seamless screen that's accepting the melodramatic and illusory story that's being projected upon it. Nondualists claim that, instead of you being just a small and limited character playing a part in your life's story, that, in truth, you're actually the entire infinite screen itself! From their point of view, you are the very context in which ALL of life itself is showing up in. According to the nondualist, your fundamental nature is Pure Consciousness, Itself. In short, "you-are-what-is."
Obviously, a non-dual perspective like that has a built in problem: the moment that you start talking about nonduality is the very same moment that you've re-entered the wonderfully wacky world of duality. So the logical question then becomes; what are all of these non-dualists going to be talking about anyway??
Read Entire Article
Upcoming Science and Nonduality Conference
at August 25, 2009

Email ThisBlogThis!Share to TwitterShare to FacebookShare to Pinterest
Labels: Consciousness

"Australia is one of the most vulnerable countries to climate change because of its hot, dry climate, with the nation's south and main food-growing area along the Murray-Darling river basin already gripped by a seven-year drought."

Australia's deadliest bushfires, and devastating floods in the nation's tropical north, will increase pressure on Prime Minister Kevin Rudd to take firmer action on climate change, environmentalists said on Monday.
At least 108 people were killed in wildfires, fuelled by a record heatwave in southern Victoria state over the past two days, while large areas of Queensland state remain flooded.
Green groups said the severe weather was a result of climate change and would increase pressure on Rudd to take stronger action to cut greenhouse gas emissions, blamed for global warming, when he introduces a new climate policy to parliament in May.
"Climate change is an issue like no other. As the impact continues to intensify, so too will the political pressure for action and events like this will become more commonplace," Climate Institute director John Connor told Reuters on Monday.
Australia has set a target to cut overall greenhouse gas emissions by 5 percent by 2020, and will only cut further, to about 15 percent, if there is widespread international agreement on tougher action.
Green groups want the government to cut emissions by at least 25 percent by 2020, as an example to the developing world, particularly India and China, about the need to take firm action to stop global warming.
Read Entire Article
at August 25, 2009

Farmers willing to plant trees to absorb carbon dioxide from industrial pollutants as well as provide alternative sources of fuel are new potential allies in the fight against greenhouse-gas emissions.
A study from the World Agroforestry Center in Nairobi, the first to assess global tree coverage on farmland using satellite imagery, said more farmers need to understand the economic benefits of planting trees. Almost half of the world’s total farmland has at least 10 percent tree-cover, researchers say.
Cutting down trees and letting them rot or burn accounts for about a fifth of the greenhouse-gas emissions blamed for global warming, according to the United Nations International Panel on Climate Change. In December, more than 180 countries will meet in Copenhagen to work on measures including slowing deforestation and land management in a climate-change treaty.
Farmers are planting trees for a source of fruit and nuts, fuel from wood and wind breaks, with the additional benefit of capturing carbon-dioxide gas that contributes to warming weather across the globe. Trees draw CO2 from the air, using it to grow, then store the carbon in their leaves and wood.
“If planted systematically on farms, trees could improve the resiliency of farmers by providing them with food and income,” said Tony Simons, deputy director-general of the World Agroforestry Center. “When crops and livestock fail, trees often withstand drought conditions and allow people to hold over until the next season.”
at August 25, 2009

Some scientists are suggesting that the slow return to a more active phase of the solar cycle may portend a general decline in solar activity. If sunspots shut down, does that mean that we could stop worrying about climate change?

Over the weekend, a paper published in the American Geophysical Union's journal Eos attracted a lot of attention, as it suggested that the levels of magnetic activity associated with recent sunspots indicated that the sun might be returning to a state of low activity, similar to that of the Maunder Minimum, which occurred in the late 17th century. That change in solar activity was notable for setting off what's called the Little Ice Age, which plunged Europe into a deep chill. Left undiscussed is what that might mean in a world where greenhouse gas changes are threatening a period of extended high temperatures.
To understand how a significant change in sunspot levels might be felt in the Earth's climate, we'll back up and look at how sunspots relate to solar output, how that output gets felt on Earth, and how it interacts with changing levels of greenhouse gasses. The answer appears to be that it could reverse the climate change that occurred during past century, but would only delay the changes expected by the end of this century.
Read Entire Article
at August 25, 2009