“Perminov said the asteroid “will surely collide with the Earth in the 2030s.”

By Nathan Hodge
Vlad Putin, we’re sorry we ever made fun of you. In an interview today with Voice of Russia radio, Russia’s space agency chief said discussions would begin soon over a plan to save the world from a collision with a massive asteroid. It’s not clear how, exactly, the Russians plan to deflect Apophis, a chunk of rock the size of two and a half soccer fields that was first discovered by astronomers in 2004. Anatoly Perminov, the space agency head, promised that there would be “no nuclear explosions” and that everything would be done “on the basis of the laws of physics.”
Astronomers initially guessed that Apophis had a reasonably good chance of smashing into Earth on its first flyby; NASA now reckons that the chances of that have gone from slim (one-in-45,000) to almost none (four-in-a million). But despite the lower NASA estimate, the Russians aren’t so sure. Perminov said the asteroid “will surely collide with the Earth in the 2030s.” Read Entire Article
at December 30, 2009

Email ThisBlogThis!Share to TwitterShare to FacebookShare to Pinterest
Labels: Above and Beyond, Earth Changes
Eclipses by James Kelleher
December 31, 2009
Lunar Eclipse7:22 PM UT
16 Degrees Gemini
Ardra Nakshatra (Editor's Note: Ardra's deity is Rudra, the lord of the storm and the god of destruction.)

Do you realize that in ancient times, astrologers were beheaded for not alerting the emperors in advance about eclipses? Eclipses were taken as negative omens. It's true, they're not the greatest days for important new beginnings or advancing one's material affairs. On the other hand, there is really no need to make them into dreaded events. In fact, eclipses are wonderful for introspection, meditation, cleaning house, letting go of old baggage, quiet time or any other spiritual pursuit. The idea of paying attention to eclipses, or any astrological event for that matter, is simply to harmonize your action with the astrological weather. Read Entire Article

"Blue Moon" to Shine on New Year's Eve
by Andrew Fazekas
For the first time in almost 20 years, a bright "blue moon" will grace New Year's Eve celebrations worldwide. If the skies are clear, revelers looking up at midnight will get an eyeful of the second full moon of the month—commonly called a blue moon. The last time a blue moon appeared on New Year's Eve was in 1990, and it won't happen again until 2028. Read Entire Article
at December 30, 2009

'God bless us, every one'

"Sustainability is more popularly discussed in terms of physical objects - for example, green buildings - but the principles of sustainability apply quite adequately to the structure of our cultural and civic lives as well."
by James Polk
The Christmas season is when we Americans - no matter what race, religious affiliation (or none), and national origin - find a space in our busy schedules to come together and spend some quality time with family and friends. At Christmastime, we shower each other with gifts, plan parties, bake assorted sweet morsels and find ourselves spontaneously wishing merriment to everyone we meet.
Petty grievances are set aside as diverse individuals congregate at family get-togethers and office parties. Disagreements fade as we find ourselves connecting with estranged acquaintances and saying nice things to people who we may otherwise secretly (or not so secretly) hold in contempt and avoid like the plague for 11 1/2 months of the year. Festive decorations, over-the-top lighting, and Christmas carol soundtracks remind us to put away our hard feelings and celebrate the good in everybody.
All of a sudden, we seem to appreciate the value of "community." Read Entire Article
at December 21, 2009

Nasa has captured a stunning image of light reflection in the northern hemisphere of Titan, the largest moon of the planet Saturn, illustrating the presence of surface liquid on the planetary body. The image, taken by the Cassini Spacecraft's visual and infrared mapping spectrometer on July 8, is the first of its kind.
Scientists had previously discovered lakes of surface liquid in the moon's southern hemisphere using infrared. It makes Titan the only other body besides Earth believed to harbour liquid on its surface. Known as a specular reflection, the glint of light has been the focus of Cassini's mission since the craft made contact with Saturn in 2004. Read Entire Article
at December 21, 2009

LEGAZPI, Philippines — Philippine troops on Monday pressed the last 3,000 villagers who have refused to heed government warnings to leave the danger zone around a volcano that experts say is ready to erupt. Tens of thousands of people have already been evacuated from the foothills of Mayon, which on Monday emitted lava fountains, powerful booming noises and other signs of an approaching eruption. But authorities are having trouble keeping villagers away from their homes and farms, said Gov. Joey Salceda. Read Entire Article
at December 21, 2009

Email ThisBlogThis!Share to TwitterShare to FacebookShare to Pinterest
Labels: Volcanoes

The Washington area struggled to return to normal Monday after a snow-drenched weekend, with most students and many workers enjoying an unexpected day off, and panicked holiday travelers struggling to rebook canceled flights at area airports. Rush hour was expected to be considerably lighter than usual, because many schools were closed and the federal government closed its agencies in the region. The Metrorail system was open and most buses were running. Highway and road conditions ranged from mostly clear to very slick. D.C. government offices were operating on a regular schedule, officials said, as were several county governments, with liberal leave policies in effect. The Metropolitan Washington Airports Authority said three of the four runways were open at Washington Dulles International Airport, and the main runway at Reagan National Airport is open as well. Still, Mark Treadaway, an airports authority spokesman, predicts it will take "several days before the volume is worked through the system." Read Entire Article
at December 21, 2009

To Deflect an Asteroid, Try a Lasso, Not a Nuke 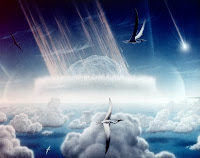 By Adam Mann
To save the world from the real threat of a major asteroid impact, one engineer has imagined a scheme similar to George Bailey’s wish to lasso the moon for his sweetheart in “It’s a Wonderful Life.”
The plan is to attach a gigantic weight to an Earth-bound asteroid using an enormous cord. This crazy-sounding contraption would change the asteroid’s center of mass and subsequently its trajectory, averting a potentially catastrophic scenario.
Aerospace engineer Major David French of the Air Force Institute of Technology mathematically modeled how different weights and lengths of tether would affect a killer asteroid’s orbit over time. The results are in the December issue of Acta Astronautica.
He found that, in general, longer tethers and larger masses would more significantly change the asteroid’s orbit. The alteration would occur slowly, taking anywhere from 10 to 50 years.
The technique would require no simple mission. The cosmic counterweight would tip the scale at billions of pounds, while the rope would range anywhere from six miles (about the height of Mount Everest), to 60,000 miles (long enough to wrap around Earth two and a half times).
This solution may sound unrealistic, but the threat is real. To date, NASA’s Near Earth Object Program, which tracks asteroids and comets that could approach the planet, has cataloged more than 5,500 objects. About 1,000 of these are classified as “potentially hazardous,” meaning they could wipe out a city, spawn giant tsunamis or, in the worst case, eradicate life with a planet-shrouding cloud of debris. Read Entire Article
at December 05, 2009

A UFO apocalypse is unfolding every single day before our very eyes. Are constant UFO sightings globally accompanied by dire Mayan prophesy of a polar shift along with solar flares and earthquakes as well as other cataclysms the writing on the wall for humanity and the planet?
Interestingly, the web-bot project also predicts a pole shift in 2012. Ufology and the countless UFO sightings seem to be waking up humanity even though far too many are just not paying attention. The forever recurring theme of waking up human consciousness with its unimaginable impact is what this seems to be all about. How many will come out of all of this unscathed? Tibetan monks with an alleged ability to remote view have seen for 2012 a world rattling with unprecedented turmoil with extraterrestrials intervening on a grand scale. Some claim we already have ETs intervening and leaving their indelible impact now all over the planet. Every government on earth should be investigating every genuine sighting: but they are not. Read Entire Article
at December 05, 2009

Email ThisBlogThis!Share to TwitterShare to FacebookShare to Pinterest
Labels: Above and Beyond, Earth Changes, Time of Change

"Some biologists point to how nature has handled the changing climate. The rare Adonis blue butterfly of Britain looked as if it was going to disappear because it couldn't fly far and global warming was making its habitat unbearable. To biologists' surprise, it evolved longer thoraxes and wings, allowing it to fly farther to cooler locales."

By SETH BORENSTEIN (AP)
With the world losing the battle against global warming so far, experts are warning that humans need to follow nature's example: Adapt or die.
That means elevating buildings, making taller and stronger dams and seawalls, rerouting water systems, restricting certain developments, changing farming practices and ultimately moving people, plants and animals out of harm's way.
Adapting to rising seas and higher temperatures is expected to be a big topic at the U.N. climate-change talks in Copenhagen next week, along with the projected cost — hundreds of billions of dollars, much of it going to countries that cannot afford it. Read Entire Article
at December 05, 2009