Record Cold Predicted Back in June

There was a massive blizzard in Britain yesterday, closing both London airports. I find it very intriguing that the UK is experiencing its coldest December in 100 years especially as this is what Dr Gianluigi Zangari predicted in July, when he first reported that the Gulf Stream (aka the North Atlantic Drift, aka the Ocean Conveyor Belt, aka the Thermohaline Circulation, aka the Thermohaline Conveyor, aka the Loop Current) that warms Britain during the winter had virtually halted. Without this moderating effect, Britain, at the same latitude as Siberia, would have the same kind of winters. I first blogged about Zangari’s findings back in September (see http://stuartbramhall.aegauthorblogs.com/2010/09/18/hello-houston-we-have-a-problem/).

Zangari is a Theoretical Physicist at the Ascati Institute in Italy. He has worked for years with a collaborative network of scientists monitoring the Gulf of Mexico Loop Current and its contribution to the Thermohaline Current System that makes the Gulf Stream that becomes the North Atlantic Drift Current. Read More...
at December 30, 2010 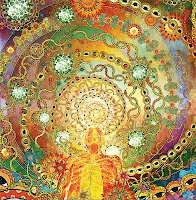 All of the question marks around the subject “2012” can be useful as a focusing lens or “a litmus test for consciousness,” as author Mark Heley proposes. Instead of fixating on any future event, we need to realize that any positive transformation, whether in 2012 or after, will only be the result of deliberate actions and conscious choices made by human beings in the present.

We find ourselves in a window of opportunity where we either radically change our direction as a species or face devastating consequences. We are at that threshold where, as the social ecologist Murray Bookchin put it, our world “will either undergo revolutionary changes, so far-reaching in character that humanity will totally transform its social relations and its very conception of life, or it will suffer an apocalypse that may well end humanity’s tenure on the planet.” Examining trends in climate change and species extinction, the esteemed scientist James Lovelock, who developed the Gaia Hypothesis, now thinks there could be only 150 million people (not six billion) left alive at the end of this century. Other scientists share his ominous outlook.

If the outlook from a purely empirical perspective looks bleak, the good news is that science has ignored some crucial factors. One is the possibility that human beings, through an evolution of consciousness, could develop a regenerative culture that contributes to the health of the biosphere. In the 1960s, the design scientist Buckminster Fuller proposed that society could be redesigned to be “comprehensively successful” for everyone on earth... Read More
at December 30, 2010

Email ThisBlogThis!Share to TwitterShare to FacebookShare to Pinterest
Labels: Consciousness

Science says that global warming will melt ice sheets which could trigger volcanic eruptions. Earthquake faults are affected due to rebounding crust which too could trigger earthquakes. (1)

The warming trends have melted the polar ice cap, raised sea levels, and have caused landslides. The polar ice cap dilemma is such an ownership problem that the United Nations is being called in to help decide upon energy rights. (Bad idea) Sea levels in Florida on the Gulf of Mexico side of the Keys are now 4 inches ABOVE ALL of the docks during high tide. During the time in which the moon affects the tide, the docks are covered by 10 inches of sea water! This phenomenon began about 6 months ago.

John Matson of Scientific American writes, “Melt-driven pressure changes could also bring on more earthquakes. As deposits of Arctic ice grow thinner, those landmasses experience less pressure, whereas rising sea levels increase pressure on coastal regions worldwide. That tipping of the scales, wrote Bill McGuire of University College London, ‘may be sufficient to trigger a geospheric response.’ In past postglacial periods, McGuire noted, melting of ice sheets appears to have set off major seismic activity, as sections of the crust previously burdened by ice rise in a process known as isostatic rebound.” (2, 3)


Keeping this simple: The warming Earth melts the frozen areas, raising the sea levels, placing stress upon the Earth’s crust, which initiates earthquakes and volcanic activity. (4)

[This scenario matches the I AM America Prophecies.]
at December 30, 2010

North and South Pole of Earth has moved

Each of approximately 200 thousand years, the two poles of the planet earth, north and south of each shift. Generally, the two poles shift takes thousands of years.

Scott Bogue, geologists from Occidental College and Jonathan Glen, researchers from the U.S. Geological Survey (USGS), who observed the lava in the area of Nevada which has 15 million years old.

The result, from the research, they discovered that the planet’s poles have shifted several times faster than normal speed. It happens at least one time.

When the lava cools, it stores records of Earth’s magnetic field. After watching the lava that has cooled for 2 consecutive years, it is known that the lava in the region shifted 53 degrees from the east to the north with a speed of 1 degree every week.
at December 30, 2010 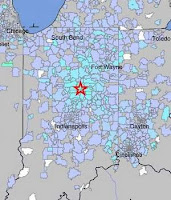 Earthquake in Indiana.
The U.S. Geological Survey reported a 3.8 magnitude earthquake centered 5 miles southeast of Greentown, Ind., at 7:55:21 a.m. today. The agency had initially reported the quake as a 4.2 magnitude. It occurred about 3 miles below the ground, the geological survey reported.
at December 30, 2010