Time Capsules from the Future 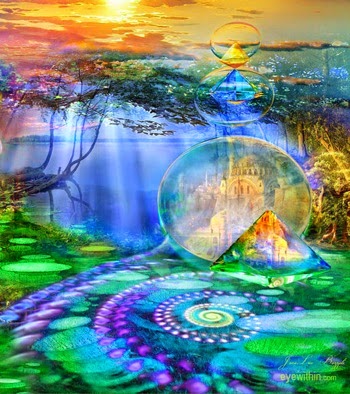 In 1972, the Ancient Arrow site was discovered in New Mexico by a few young hikers. They came upon some caverns which led deeply into the mountain side. These caverns were spreading out like a wheel on both sides of a long tunnel. Each side-tunnel ended in a chamber, 23 all together, and these chambers all had artifacts in them. The young hikers were in awe because they figured what they saw couldn't be of this world!
The site was subsequently taken over by a special branch of the United States National Security Agency whose mission is to create and decode encrypted messages.  In short time, the NSA came to the same conclusion as the hikers, that these artifacts, in the form of out-of-this-world paintings, odd-looking technologies, engraved symbols and complex star charts were something they'd never seen here on Earth before. They named the site, Ancient Arrow Project, it was categorized as ‘Above-Top-Secret’ and it was sealed off from public access.
Upon further explorations of the caverns and the chambers, they found other artifacts besides paintings, such as poetry, music discs and a disc containing more than 8,000 pages with written material in a language similar to Sumerian. However not even the best linguists at the U.S. Advanced Contact Intelligence Organization (ACIO) could decode any of it.
The Ancient Arrow Project was shelved for 22 years, due to an inability to have the technology required to open an informational disc found at the site, and decipher what was written on it.
Eventually one of the scientists who devoted his life to understanding these encoded transmissions, found himself in telepathic contact with the very civilization that prepared this underground enigmatic time capsule. They are a civilization living 800 years into our future on our timeline and they left these traces and the advanced wisdom to us to be opened in our future when we on Earth, are ready. Read More

Secrets of the Chakras: Mother Karunamayi 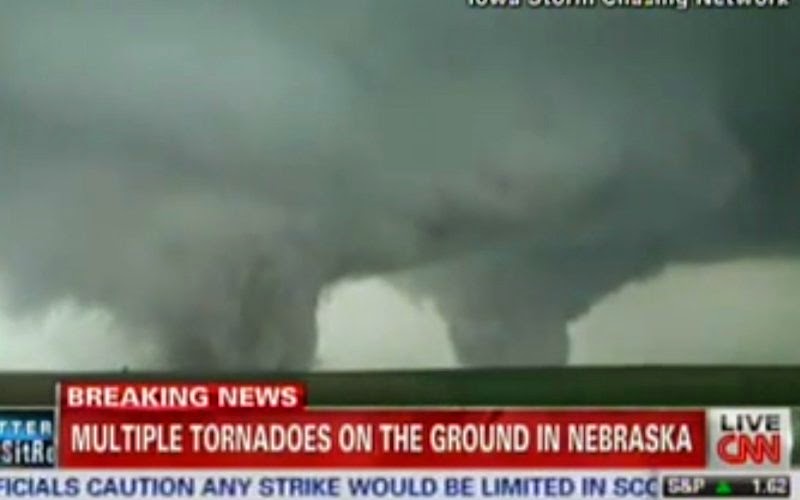 (from The Daily Beast) There are now two confirmed casualties from the freak dual tornado that hit Nebraska Monday. Nebraska Gov. Dave Heineman declared a state of emergency as tornadoes hit multiple counties. A five-year-old was killed as well as 75-year-old David Herout, who died when the storms ejected him from his vehicle. The town of Pilgner suffered considerable damage after two tornadoes hit side-by-side at the same time, with Stanton County Sheriff Mike Unger saying 50 to 75 percent of the area was destroyed. Stanton County Commissioner Jerry Weatherholt said the town was "like a war zone."
at June 17, 2014

[from Global Research]
Fukushima did not just suffer meltdowns, or even melt-throughs, It suffered melt-outs where the nuclear core of at least one reactor was spread all over Japan. In addition, the Environmental Research Department, SRI Center for Physical Sciences and Technology in Vilnius, Lithuania reported in the Journal of Environmental Radioactivity:

Analyses of (131)I, (137)Cs and (134)Cs in airborne aerosols were carried out in daily samples in Vilnius, Lithuania after the Fukushima accident during the period of March-April, 2011.***The activity ratio of (238)Pu/(239,240)Pu in the aerosol sample was 1.2, indicating a presence of the spent fuel of different origin than that of the Chernobyl accident.

(“Pu” is short for plutonium.) Fukushima is 4,988 miles from Vilnius, Lithuania. So the plutonium traveled quite a distance. Today, EneNews reports that a fuel fragment from Fukushima has been found in Norway:


Atmospheric Chemistry and Physics Discussions, Atmospheric removal times of the aerosol-bound radionuclides 137Cs and 131I during the months after the Fukushima Dai-ichi nuclear power plant accident – a constraint for air quality and climate models, May 2012: Hot particles (particles that carry very high radioactivity, e.g., fragments of the nuclear fuel) were present in the FD-NPP plume.

Fukushima is 10632 kilometers – or 6,606 miles -from Svalbard, Norway. Moreover, the distance is actually much further … because it took a circuitous route from Fukushima to Norway.As ENENews reports:


(Paatero et al. 2012) Journal of Environmental Radioactivity, Airborne fission products in the High Arctic after the Fukushima nuclear accident: It is evident that the plume arriving in Svalbard did not come from Europe but directly from North America [...] [Hot particles are] either fragments of the nuclear fuel or particles formed by the interactions between condensed radionuclides, nuclear fuel, and structural materials of the reactor [...] Based on the total beta, 137Cs and 134Cs activity content [...] on the filter it can be estimated that a significant part of the activity related to Fukushima was in hot particles. So far the authors are not aware of any other reports concerning hot particles from the Fukushima accident. [...] the radionuclides emitted into the atmosphere were quickly dispersed around practically the whole northern hemisphere within a couple of weeks. Read More

Email ThisBlogThis!Share to TwitterShare to FacebookShare to Pinterest
Labels: Earthquake, Time of Change

Earth may have underground 'ocean' three times that on surface

(The Guardian)
After decades of searching scientists have discovered that a vast reservoir of water, enough to fill the Earth’s oceans three times over, may be trapped hundreds of miles beneath the surface, potentially transforming our understanding of how the planet was formed.
The water is locked up in a mineral called ringwoodite about 660km (400 miles) beneath the crust of the Earth, researchers say. Geophysicist Steve Jacobsen from Northwestern University in the US co-authored the study published in the journal Science and said the discovery suggested Earth’s water may have come from within, driven to the surface by geological activity, rather than being deposited by icy comets hitting the forming planet as held by the prevailing theories.
“Geological processes on the Earth’s surface, such as earthquakes or erupting volcanoes, are an expression of what is going on inside the Earth, out of our sight,” Jacobsen said.
“I think we are finally seeing evidence for a whole-Earth water cycle, which may help explain the vast amount of liquid water on the surface of our habitable planet. Scientists have been looking for this missing deep water for decades.”
Jacobsen and his colleagues are the first to provide direct evidence that there may be water in an area of the Earth’s mantle known as the transition zone. They based their findings on a study of a vast underground region extending across most of the interior of the US. Read More
at June 13, 2014