Famine or Feast: Climate Change and the Future of Food Production 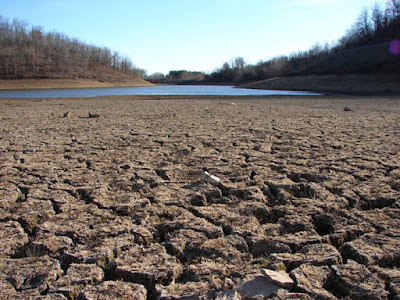 [Harvard] It is the year 2080. As climate change continues, unhindered by weak regulations and international disagreement, temperatures have risen several degrees Fahrenheit. In tropical and arid areas, water is in short supply. In other parts of the world, heavy rainfall causes devastating floods. The rate of extreme weather events has increased — catastrophic natural disasters seem to be almost a normal part of life. Food insecurity has soared; advances against hunger in developing countries have been all but erased. Yet the United States and Europe are growing richer: an increase in temperature has spurred crop growth in their temperate regions, and yields are rising. Developing countries in Africa, Asia, and Latin America are forced to rely on developed countries, which have little incentive to reduce their own emissions, for aid. As international inequity grows, so do political tensions.
Consider another case. It is the year 2080. Concerned about the effects of climate change, governments of developing countries, assisted by international committees, have incorporated climate considerations into national policy. Food producers, from major corporations to family farms, have adapted to changing conditions with improved packaging, diversification, and transportation. Trade has kept food prices relatively stable, and Aid for Trade programs have helped boost economies while regulating carbon emissions. Developed countries, recognizing both the benefits of these policies and their own vulnerability to climate change, have made a commitment to cooperation. While 2080 does not look like 2016, international trade, foreign aid, and bilateral and multilateral partnerships have helped the world escape the most devastating effects of climate change.
Neither of these scenarios is likely to occur exactly as described; the future may fall somewhere between them. However, climate change will almost certainly have significant effects on global food production. The most detrimental impacts will occur in developing countries, as a result of their economic reliance on climate-sensitive sectors, limited capacity to respond to changes, and geographic conditions, which will worsen inequality. Meanwhile, in temperate areas of developed countries, food yields could actually increase in the short term. However, climate effects will reduce the quality and safety of food in these areas. Adaptive measures will be difficult and costly, requiring significant international financing and a cohesive global plan. Ultimately, though, if nations recognize the possible consequences and their own stakes in changing them, these measures have the potential to successfully mitigate the effects of climate change.
According to the International Food and Agricultural Trade Policy Council (IPC), climate change has five major consequences that universally alter food production. The magnitude of these consequences can vary with location; some negatively impact the availability of food, while others can actually increase crop yields, despite their detrimental effects on other aspects of life. First, climate change causes changes in temperature, which in turn affects plants, animals, pests, and the water supply in a variety of ways. Second, changes in precipitation patterns also affect the water supply, which then alters plant growth. Third, increases in atmospheric carbon dioxide directly affect crop yields as well; carbon dioxide acts as fertilizer, increasing the productivity of some plants, but also allowing weeds to grow more quickly. Fourth, climate change leads to extreme weather, which can have catastrophic consequences for agriculture and transportation systems. Finally, a rising sea level can lead to flooding and reduce the availability of arable land.
As a result, according to the 2014 National Climate Assessment, climate change will likely have a major impact on international markets and food prices. Climate change increases variability in crop and livestock yields because it leads to extreme weather and alters precipitation patterns. In turn, this causes uncertainty in production totals, which can affect domestic and international markets. Global food prices decreased steadily throughout the second half of the twentieth century, but they have been increasing since 2000, according to the 2015 Food Security Assessment of the US Department of Agriculture (USDA). This increase can be partially attributed to the detrimental effects of and the uncertainty caused by climate change. Read More

A massive earthquake will inevitably hit California in the future, and experts warn the state is not prepared 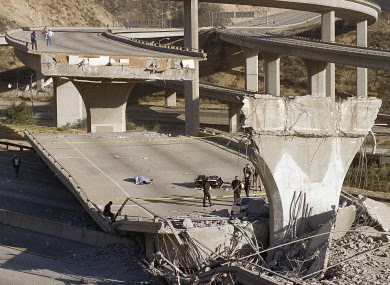 [The Journal] BEYOND THE SUNSHINE, the palm trees and Hollywood, if there is one certainty in California, it’s that a massive earthquake will strike at some point.
But when the Big One hits, a recent report says, the western state is ill-prepared and local officials as well as major businesses need to face that reality to “prevent the inevitable disaster from becoming a catastrophe”.
Drafted by a group of business and policy leaders, the report identifies several key areas that need to be addressed before a quake as strong as a magnitude 8 happens, notably aging infrastructure, water supplies and the risk of catastrophic fires.
One of the biggest vulnerabilities, the report states, relates to the Cajon Pass, a narrow mountain pass where the mighty San Andreas Fault intersects with key lifelines, including freeways, railway lines, gas and petroleum pipelines as well as electric lines.
A major earthquake on the San Andreas, one of California’s most dangerous faults, would cut most lifelines in and out of southern California, preventing critical aid from reaching some 20 million people and hampering recovery efforts, experts say.
The quake would also rupture flammable pipelines, triggering explosions and fires that could burn out of control.
“Anything that comes into southern California has to cross the San Andreas Fault to get to us – gas, electricity, water, freeways, railways,” said seismologist Lucy Jones, who acted as advisor for the Southern California Disaster Risk Reduction Initiative committee, which issued the report.
“Most of the water that we get has to cross the fault to reach us but when the earthquake happens, all of the aqueducts will be broken at the same time,” Jones, known as California’s “earthquake lady”, told AFP.
She said one way to get around this dependency was to look at alternative water sources, including from contaminated aquifers beneath the Los Angeles area that could be cleaned up, albeit at a massive cost.
Installing automatic shutoff valves on natural gas and petroleum gas pipelines that run near the San Andreas Fault could also help prevent major fires, according to the report.
As for maintaining communication with the outside world once the Big One strikes and disrupts energy grids, Jones said solar power could be one answer.

Also addressed in the report is the vulnerability of many homes and buildings in southern California, where local communities have yet to follow the example of the city of Los Angeles in requiring that structures that risk collapsing be retrofitted.In addition, experts say, building codes need to be reviewed to make sure that not only will structures not kill people but will remain standing and usable after a major quake.
Computer simulations by the US Geological Survey (USGS) suggest that a magnitude 7.8 quake on the southern end of the San Andreas fault would cause shaking for some two minutes, killing at least 1,800 people, injuring 53,000 and causing $213 billion in damage.
The largest recorded earthquake in California was the 1857 Fort Tejon quake that ruptured the San Andreas for 225 miles (360 kilometers).
Scientists say pressure and seismic energy has since furiously been building along the fault, which constitutes the boundary between two moving tectonic plates – the North American and Pacific plates. Read More
at July 19, 2016

Earth's tides can trigger earthquakes along the San Andreas Fault 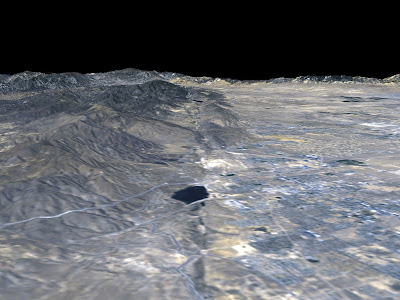 [Business Insider] Extending for 800 miles, the earthquake-prone San Andreas Fault in southern California has been relatively quiet lately.
Deep below the surface, along the fault, however, there are hundreds of thousands of tremors called low-frequency earthquakes, which occur routinely in areas where the planet’s brittle crust is getting weaker and softer.
Gravitational tugs from the moon and the sun don't just cause the rise and fall of the seas (high and low tides), they also cause the surface of the Earth to go up and down as well, stretching and compressing the planet’s crust in “solid Earth tides.” These earth tides stress the faults deep inside the planet, making it easier or more difficult for faults to slip depending on the tidal phase.
Previous research has found that these Earth tides can trigger tremors, but a new study published in Proceedings of the National Academy of Sciences found that these small, deep earthquakes within California’s San Andreas Fault are more likely to occur during certain phases of the tidal cycle.
In other words, when the tug of the moon or sun is pulling in the same direction as the fault is slipping, it causes the fault to slip farther, and faster.
Like with ocean tides, the strongest Earth tides occur when the sun and moon are aligned, and the weakest occur when they are 90 degrees apart. Surprisingly, the number of low-frequency earthquakes didn’t spike at the strongest point in the tidal cycle, but instead when the tide was waxing (strengthening).
The researchers arrived at these results when they compared the timing of 81,000 catalogued low-frequency earthquakes — not larger than a magnitude 1 on the Richter scale — along the San Andreas Fault between 2008 and 2015 to the two-week solid earth tidal cycle, known as the “fortnightly tide.” Read More
at July 19, 2016

Global Temperatures Are on Course for Another Record This Year 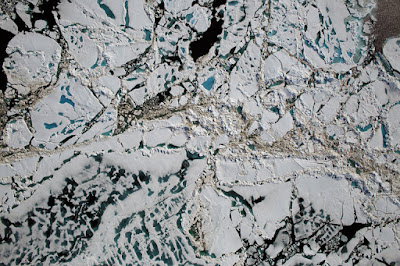 [NY Times] The world is on pace to set another high temperature benchmark, with 2016 becoming the third year in a row of record heat.
NASA scientists announced on Tuesday that global temperatures so far this year were much higher than in the first half of 2015.
Gavin Schmidt, director of NASA’s Goddard Institute of Space Studies, said that while the first six months of 2015 made it the hottest half-year ever recorded, “2016 really has blown that out of the water.” He said calculations showed there was a 99 percent probability that the full year would be hotter than 2015.
Dr. Schmidt said the world was now “dancing” with the temperature targets set last year in the Paris climate treaty for nations to limit global warming.
He attributed part of the rise in temperatures this year to El Niño, in which warming waters in the equatorial Pacific pump a lot of heat into the atmosphere. El Niño is now ending and water temperatures in the Pacific are dropping, which should lead in 2017 to lower but still historically high temperatures.
Average temperatures for the first six months of this year were about 1.3 degrees Celsius, or 2.3 degrees Fahrenheit, above the average in 1880, when global record-keeping began, and “quite close” to 1.5 degrees Celsius above preindustrial levels, Dr. Schmidt said in a conference call with other NASA scientists.
The warming in the first half of this year extended across all parts of the planet except for most of Antarctica, Dr. Schmidt said. Warming was especially strong in the Arctic, where it had an impact on the sea ice coverage.
Walt Meier, a scientist at NASA’s Goddard Space Flight Center, said that the geographical extent of the Arctic ice so far this year was the lowest for any half-year since satellite record-keeping began in 1979, largely because warm temperatures caused melting to begin as much as two months earlier than usual. Read More
at July 19, 2016