Detention Vs. Meditation: And The Winner Is… 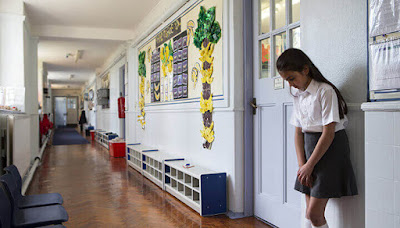 [Alternative Daily] In many schools across America, detention is the go-to punishment when a student misbehaves. The offending child is often told to go to the principal’s office, where a form of detention is assigned. For minor offenses, it is often lunch detention. For more serious, or pattern misbehavior, after-school detention is likely the verdict.
Of course, school systems vary greatly, but the concept of detention for in-school punishment is widespread. Kids are often told to sit quietly and do their homework. They are not allowed to talk. They can’t do any “fun activities” so that they will feel the weight of their punishment. However, is this method of discipline effective?
Whether or not detention is effective may depend entirely on how instructors and principals handle it. As Teresa Gemellaro, a teacher in Queensland, Australia, wrote for Quora:
“A detention where a teacher has a restorative conversation with a student about how things can be improved can be very effective.”
This makes sense. If teachers and principals take the time to talk to students about why they acted out and get to the root of the problem, they can discover constructive solutions. Maybe the student is having trouble at home, or trouble with peers. Maybe the course material is difficult for the student to understand, and this is leading to aggression or distracted behavior.
Having an open dialogue with a student when they misbehave can bring these sorts of issues to the surface. It allows teachers, principals, students and parents to work on improving them together. If root causes are addressed, the “problematic” symptoms of student misbehavior may be positively resolved.
In many cases, however, detention is not a place where open dialogue between students and teachers is created. Many schools simply have students sit quietly as punishment, and this may be largely ineffective for many students. As Gemellaro points out:
“A detention where the teacher makes the child write out lines, or some other activity that has no bearing on the problem and does not cause the student to reflect on the effect of their behavior is much less likely to be effective. It will work for some students, simply because they do not want to waste time on similar detentions in the future. However, in terms of increasing the maturity of the student to reflect on their own behavior, and make better choices as a result of good decision making, it is not so effective.”
As an alternative to standard detention, Robert W. Coleman Elementary School in Baltimore, Maryland is trying something revolutionary: sending kids to a meditation room. If a student acts out in class, the teacher directs them to the “Mindful Moment Room” instead of handing them a detention slip.
The Mindful Moment Room is adorned with zen decorations and comfy pillows. There, teachers guide students in breathing exercises and mindfulness. This allows them to calm down and get their feelings into perspective. Additionally, instructors encourage students to talk through the situation that occurred, and get to the root of why they acted the way they did.
The Mindful Moment Room was put into place with the help of the nonprofit organization Holistic Life Foundation and it has been a great success. According to Kirk Philips, Robert W. Coleman Elementary School’s Holistic Me coordinator, the school had no suspensions last year — and none this year so far either. At a nearby high school which has a similar mindfulness program, attendance rates are up and suspension rates are down. Read More
at October 20, 2016

Exposed: The Climate Fallacy of 2100 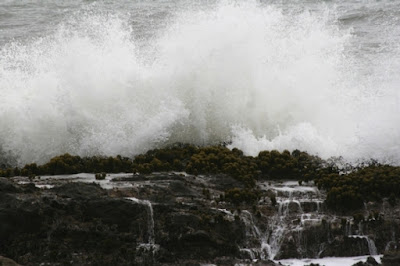 [Scientific American] It’s shocking for me (Robert) to accept that my home could be wiped out by greatly rising seas. That’s because I live on a hill north of San Diego, 45 feet above sea level and more than a mile inland from the coast. Equally shocking to me (Dan) is that the current coastline of my beloved Mendocino County, California, could largely disappear, a place where I spend weekends with my daughters exploring rivers that run inland, deep into wine country. These inundations won’t happen this century, but that is little solace. At the rate the world is going, land so dear to our hearts could slip under the sea and stay there for thousands of years.
That hurts. Most of us believe our homes, our towns, our cities will be here for centuries and millennia to come. And why not? In Europe and across Asia millions of people live in cities that are thousands of years old. Indeed, inspired by European permanence, Robert’s family built garden walls from stone and fondly looked forward to passing on the land to hoped-for-grandchildren, and theirs, and so on.
That idea, however, now seems flawed to both of us writing this article. Strong, new research indicates that anyone or anything tens of feet above the sea today may one day face an unbeatable force, whether a country home near San Diego or a skyscraping condo in Miami. Although shorelines are forever evolving, these changes can be predicted directly, and are due to needlessly excessive carbon dioxide (CO2) emissions from a relatively brief, recent period of time.
How has the public not been made clearly and painfully aware of this? Why does fierce debate over climate miss so glaring a threat? The misperception, the widespread disbelief and the fallacy are rooted in a grave error in our thinking about time. Read More
at October 20, 2016 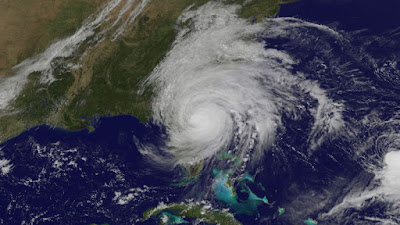 [The Surge] Hurricane Matthew slammed Florida and the East Coast recently in a show of nature’s destructive power. All of America, rightfully so, was focused on the safety of those living in Florida and the coast, but one thing I thought about also was how hurricanes might affect offshore drilling rigs.
It’s an understatement to say that waters get choppy when a category five hurricane barrels through, so what happens to the rigs and the workers?
Perhaps we can learn something from what occurred with Hurricane Katrina in 2005.
The storm destroyed 50 offshore oil platforms, and did serious damage to Shell’s Mars platform, which was the top producer in the Gulf. It took 600,000 man hours to fix that particular rig.
In the eight months following Katrina, offshore oil production was one-third lower than what it was in the eight months before.
These numbers are devastating, but what about the safety of the workers?
Oil companies practice hurricane safety with their workers every year to make sure established rules and plans are in place. Normally all non-essential workers are evacuated, and a core group gets left behind to shut down operations and make sure everything is secure. That core group is then evacuated and the rig, if possible, is operated remotely.
When the storm passes, workers travel back out to the rig to fix any damage that may have occurred thanks to the hurricane. The Gulf Coast is home to some 3,000 oil rigs, so I can only imagine how a hurricane can affect oil prices due to the shutdown of offshore drilling. Read More 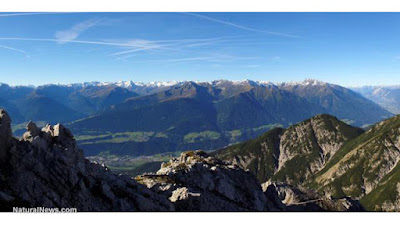 [Natural News] Whenever most people hear the terms "chemtrails" and "weather modification" they tend to roll their eyes and classify the person talking about those subjects as a tinfoil hat wearing conspiracy nut. Fewer people recognize the term "geo-engineering," but all three of these refer to the same thing: cloud-seeding to create weather patterns in order to effect a certain climate outcome for a region.

As noted earlier in a report by Natural News, the concept isn't new. In fact, it can be traced at least to a 1996 Air Force research paper, which identified "weather" as a potential "force multiplier" – that is, weather can be used as a means of enhancing U.S. military forces during a conflict.

In more recent times, actual companies have sprung up that offer weather modification services in response to the need of governments to manage water resources and monitor "environmental quality." Cloud-seeding – a scientific technique designed to "enhance a cloud's ability to produce moisture" – is one of these services.

So, clearly there isn't any wild conspiracy here. In fact, as reported by Secrets of the Fed, pilots, scientists and doctors in this video reveal the truth about chemtrails – what they are, why they are being deployed, and what they mean to the overall health of the human race and the planet. One of the people providing testimony at a forum on the subject called them a "threat" to humanity. Read More
at October 20, 2016