We don't need nearly as much protein as we consume 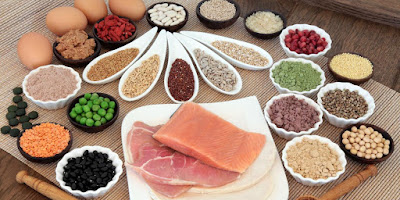 [BBC] In the early 20th Century, Arctic explorer Vilhjalmur Stefansson spent a collective five years eating just meat. This meant that his diet consisted of around 80% fat and 20% protein. Twenty years later, he did the same as part of a year-long experiment at the New York City’s Bellevue Hospital in 1928.
Stefansson wanted to disprove those who argued that humans cannot survive if they only eat meat. But unfortunately for him, in both settings he very quickly became ill when he was eating lean meats without any fat. He developed "protein poisoning”, nicknamed “rabbit starvation”. His symptoms disappeared after he lowered his protein intake and he raised his fat intake. In fact, after returning to New York City and to a typical US diet with more normal levels of protein, he reportedly found his health deteriorating and returned to a low-carb, high fat, and high protein diet until his death aged 83.
His early experiments are some of the few recorded cases of high protein intake having extreme adverse effects – but despite soaring sales of protein supplements, many of us are still unsure how much protein we need, how best to consume it, and if too much, or too little, is dangerous.
Despite obesity rates doubling over the past two decades, we’re becoming increasingly conscious of what we’re eating. In recent years many of us have swapped white bread for brown and wholemeal bread and full-fat milk for skimmed. Taking centre stage in our health kick is protein, with protein balls, bars and enhanced protein versions of staple products, from cereals to soup, dominating supermarket shelves. And with the global protein supplements market valued at $12.4bn (£9.2bn) in 2016, it’s clear we’re buying into the idea that we need as much protein as possible.
But some experts now argue that foods with inflated protein (and prices) are a waste of money. Read More
at May 26, 2018

Email ThisBlogThis!Share to TwitterShare to FacebookShare to Pinterest
Labels: Health, Plant Based Diet 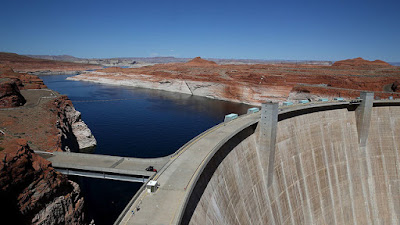 [FOX10] Rivers and watering holes are drying up, popular mountain recreation spots are closing and water restrictions are in full swing as a persistent drought intensifies its grip on pockets of the American Southwest.
Climatologists and other experts on Wednesday provided an update on the situation in the Four Corners region - where Arizona, New Mexico, Colorado and Utah meet. They say the area is among the hardest hit and there's little relief expected, and even robust summer rains might not be enough to replenish the soil and ease the fire danger.
The region is dealing with exceptional drought - the worst category. That has left farmers, ranchers and water planners bracing for a much different situation than just a year ago when only a fraction of the region was experiencing low levels of dryness.
Brian Fuchs, a climatologist with the National Drought Mitigation Center in Nebraska, said people are become more aware and more concerned.
"We've been on this pattern where conditions have dried out, we haven't seen much relief through last summer or into the winter months and here we are going into the summer of 2018 with over two-thirds of the region already in drought," he said. "So that's alarming to say the least."
Portions of the four states are seeing near-record to record dryness. Fuchs explained that some spots have missed out over the last two years on more than 12 inches (30 centimeters) of precipitation - which can add up to as much as a year's worth of rain under normal conditions. Read More
at May 26, 2018

Email ThisBlogThis!Share to TwitterShare to FacebookShare to Pinterest
Labels: Drought

Did Fracking Cause the Hawaii Volcano Eruption?

[USSANews] On the Big Island of Hawaii, where the Kilauea volcano has explosively erupted, there is a geothermal energy plant. It is the Puna Geothermal Venture (PGV) Plant, in Puna.
There is a long-running debate about whether PGV is fracking. The debate may be a matter of terminology, because in the geothermal process, as hawaiifracking.com reports, “…the drilling and the injection of cold water into hot rocks used in geothermal energy plants does fracture the rocks, which can induce earthquakes and through contamination of the atmosphere and water tables can affect our health and safety.”
Whether deep injection of fluid aims to capture oil, gas, or heat (geothermal), the beginning stage of the process is the same.
Earthquakes induced by this water-injection could obviously trigger a volcano.
For example, here is an alarming article about a geothermal project in Switzerland. Swissinfo.ch, December 10, 2009: “The authorities in canton Basel City say they will cancel a geothermal energy project, which three years ago caused minor tremors that damaged many buildings.”
“A risk analysis study published on Thursday found that the danger of setting off more earthquakes was too great if drilling at the site resumed.”
“The project was put on hold three years ago after thousands of claims for damage were filed with insurers. Total costs for the damage were around SFr9 million ($8.78 million).”
“The study, commissioned by the canton, concluded that Basel was ‘unfavourable’ for geothermal power generation.”
“It said the resumption of Deep Heat Mining project and its operation over a 30-year period could set off around 200 tremors with a strength of up to 4.5 on the Richter Scale – in 2006, the quakes were about 3.4.” Read More

Email ThisBlogThis!Share to TwitterShare to FacebookShare to Pinterest
Labels: Volcanoes

[Chemtrails North] The existence of chemtrails used to be a topic of debate, but they are now being more widely acknowledged by experts like meteorologists to scientists. It’s becoming increasingly difficult to deny that they exist as more and more people are coming down with illnesses related to chemtrails.
When TV host Rachel Reenstra had trouble overcoming a persistent cough, accompanied by aches, pains, and fever, she visited a doctor. After chest x-rays revealed a type of bronchitis, she was given antibiotics, which only seemed to make her feel worse.
Her doctor told her that lots of bacterial infections are going around, and when she asked him where they are coming from, he told her the truth that many doctors wouldn’t dare reveal to their patients: Chemtrails are at the heart of widespread lung problems right now. Surprised by his candor, she asked if she could videotape him talking about the phenomenon. You can see the video below; the unnamed doctor appears just before the 8-minute mark. View Video
at May 26, 2018