Monstrous planet getting closer, but hidden behind chemtrails. Mar 30 2018

Email ThisBlogThis!Share to TwitterShare to FacebookShare to Pinterest
Labels: Above and Beyond, Anthropogenic Climate Disruption, Time of Change

Guatemala town destroyed by volcano thought it was safe 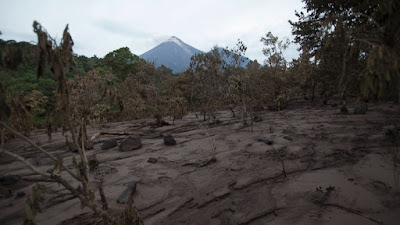 [ABC] Orlando Paez plans never to go back to his hamlet of San Miguel Los Lotes, where he narrowly escaped an onrushing river of superheated volcanic ash as his dying neighbors screamed for help.
"I don't know what they are going to do with this land," Paez said days after Guatemala's Volcano of Fire violently erupted, "but please, nobody should ever be allowed to live there again."
A good question is why authorities ever allowed it in the first place.
Nestled on the flanks of the extremely active volcano, the village was square in the path of a gulch that channeled the downhill flow of fast-moving hot rock, ash and debris when the mountain erupted Sunday, burying homes up to their rooftops.
At least 109 people were killed and nearly 200 remain missing, according to the most recent official toll.
While the volcano hadn't produced a similar town-destroying outburst since 1974, it has been almost continuously active since 2002, and over the past year, it has repeatedly sent lava or superheated flows of ash and debris running down ravines on its flanks, sometimes for more than a mile (more than 2 kilometers).
Still, locals said that since the village was first settled in the 1950s as housing for coffee pickers who worked on local plantations, such rivers of ash and rock had never flowed through Los Lotes.
Residents thought they were safe.
"Not disaster officials, not anybody, nobody knew what was going to happen," said Efrain Suarez, 59, a truck driver who lived in the neighboring village of El Rodeo and whose relatives lived in Los Lotes.
Locals said any ash flows normally would travel down a deeper gulch, called Las Lajas, just to the north.
But in the decades since the Volcano of Fire's last major eruption, the government had built a bridge across the gully of Las Lajas.
Suarez believes that bridge — seen collapsing as the ash flow hit it in a video widely shared on social media — may have had fatal consequences.
The downward flow became blocked by the bridge and debris that piled up behind it, causing it to overflow into the narrow valley just to the south, where Los Lotes is located, he said.
"It changed course because the gully couldn't hold the ash flow. It came too rapidly, and there was too much of it," Suarez said.
Disaster preparedness officials did not respond to repeated requests for comment.
Enrique Godoy, the head of Propuesta Urbana, a nonprofit specializing in development issues, said Guatemala suffers from a triple problem: weak institutions; a huge amount of informal housing built by poor residents wherever they can; and a lack of land use and zoning regulations, which exist in only five of the country's 340 townships.
The government technically has the power to declare an area high risk and order people to leave, he said, but "what do you do with the people living there? You can go and tell them to leave, but that becomes a very big social problem. Somebody has to relocate them, and who is going to pay for that?"
Paez was lucky. He lived in one of the homes on the far edge of Los Lotes, and he and his family were able to get out just in time. But all around them, he saw and heard people dying.
"I saw people burned, people torn apart, legs, heads lying there," Paez recalled.
Paez's family was typical of Los Lotes' haphazard growth over the years, with five sons each building a dwelling on a plot their grandparents had settled.
The houses were at various stages of construction, some little more than tin-roof huts held up by poles, others of cinderblock or brick. The government built a brick school and a water cistern.
Now it all stands to be abandoned. Rainfall has turned the huge ash field into a hard, concrete-like terrain, and residents are increasingly convinced that those bodies still buried will never be recovered.
"Perhaps a fourth of the people got out," Paez estimated. "Most of the people are buried there. Our whole lives are buried there, everything, our homes."
Another Los Lotes resident who survived the volcano, Alonso Castillo, estimated that more than 400 people lived in the town.
The government had also allowed a luxury golf course and housing development to be built near the volcano, and it too was ruined, though there were no reports of anyone killed there.
But 99 percent of natural disaster problems happen in poor, informally built communities, Godoy said, and one complicating factor for towns like Los Lotes is that they have existed for decades. Read More
at June 08, 2018 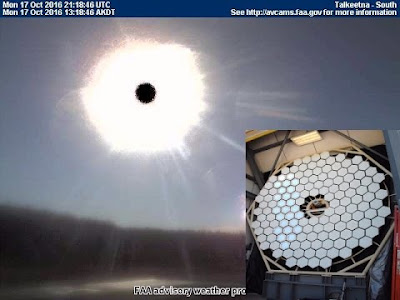 [ATAM] The technology and science you see being used today that claims to be the result of recent breakthroughs in science is at least 40 years old. There have been discoveries on the planet left by ancient civilizations that were very technologically advanced, that we benefit from today. There is also reverse engineered technology from crashed space crafts (UFO’s), as well as an exchange of technology from various alien races visiting the planet. We, the people do not get to see, enjoy and benefit from the technology that would liberate humanity…yet.
For many years I have spoken that the Chemtrails we see in the sky are not placed there just to make us sick, but they are concealing something they don’t want us to see along with changing the planet at the same time. This is where we go deeper into the rabbit hole and I am thought to be making up conspiracy theories by some. The Chemtrails serve multiple purposes; apart from making people sick. I don’t claim to know all of them, but one has been recently confirmed, that I have long stated.
#1) I have felt for some time that there is a massive Geoengineering Program taking place and our planet is being terraformed. All the major and western nations are in agreement. Why? A short quick answer. As we have been stating for many years, the elite are preparing the planet to be ruled by the losing side (fallen angels/aliens). They need the atmosphere to be changed in order to live here. They and their human and hybrid counterparts on Earth are too arrogant to accept they will not prevail. One of the main purposes for CERN’s existence is to open portals and bring in Nephilim overlords and Fallen Angels/Aliens imprisoned and trapped, in the 4th dimension and other realms. They want to return to rule the planet, as in pre-Flood times, and our solar system; as gods of this world. They forget, “The Earth is Yahweh’s (the LORD) and all that dwells within it.” There are many prophecies in the Bible that foretell of the kings of Earth actually wanting to make war with Yahweh in a battle that will take place in the literal heavens (sky, space). Here are a few:
“Why do the heathen rage, and the people imagine a vain thing? The kings of the earth set themselves, and the rulers take counsel together, against the Lord, and against his anointed, saying, He that sits in the heavens shall laugh:the Lord shall have them in derision.” Psalms 2
“These 10 kings shall make war with the Lamb, and the Lamb shall overcome them: for he is Lord of lords, and King of kings: and they that are with him are called, and chosen, and faithful.” Revelation 17:14
#2) The hi-tech ships (UFO’s) flying in our atmosphere are moving about more frequently during the daylight hours. The Chemtrails are sprayed to conceal the increasingly heavy traffic, making them hard to be seen in our atmosphere. Just about a week or so ago, two pilots flying over Arizona witnessed a fast moving craft. Finally, they are allowing reported sightings by pilots to make headline news.
#3) I have recent learned that the Chemtrails are also being used to conceal a giant New Planetary Bodies that’s becoming more obvious as they get closer to Earth in our solar system. They wont be hid for much longer, as you will clearly see in the recent videos below. There is a reason behind the early morning, odd hours and evening layers of Chemtrails blanketing our skies. (Thanks James Triplett for the video)
Have you heard of NASA’s Sun Simulator? About 20,000 ft in the sky is a Sun Simulator that tracks the movement of the Sun and mimics it. If at times the Sun seems smaller or larger or somewhat distorted from it’s spherical shape, you are most likely seeing the hexagon shaped Sun Simulator. Other countries such as Germany and China also have giant Sun Simulators. Germany recently launched the world’s largest Sun Simulator. Why would we need to have a Sun Simulator? There are many reasons science will give us, but one of the main reasons at this time is to further conceal the New Planetary System of gigantic planets that have entered our inner solar system and will soon be seen by all. Read More
at June 08, 2018

Email ThisBlogThis!Share to TwitterShare to FacebookShare to Pinterest
Labels: Above and Beyond, Anthropogenic Climate Disruption

Lava From Kilauea Boils Away Freshwater Lake In Hawaii 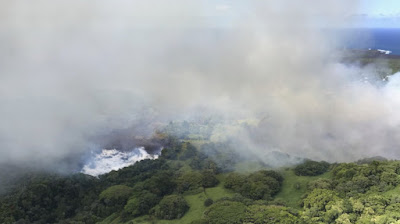 [NPR] Green Lake was gone in hours.
Lava from Kilauea volcano spilled across highways and into Hawaii's Green Lake — a major source of freshwater on Hawaii's Big Island — and evaporated all the water, according to the U.S. Geological Survey.
The flow created a huge plume of steam as it hit the lake Saturday on its way toward the ocean, according to Hawaii County Civil Defense agency.
"The lava is quite hot, so it boiled away the water," Sally Sennert, a USGS volcanologist embedded at the Smithsonian's Global Volcanism Program, tells NPR.
"The lava flows, like a stream of water, are going to take the path of least resistance as they flow downhill," Sennert says, adding that she doubts the lake will return. "All I've heard is reports that lava has filled it up," she says.
The lava entered Green Lake at 10 a.m. local time and had evaporated all the water by 3 p.m., according to the USGS.
Rivers of lava from Kilauea have claimed hundreds of homes and displaced thousands of people since a major eruption more than a month ago. A total of 22 fissures have opened up, according to Hawaii Public Radio.
The lava has advanced at 656 yards per hour, the fastest lava flow rate on record, according to the USGS.
The agency warns that there are still "vigorous lava eruptions" in the lower East Rift Zone, making the Pacific Ocean dangerous to enter in that area. Lava flowing into the ocean can cause explosions, propel rocks and create plumes of "laze," which Hawaii County officials describe as hydrochloric acid and steam with fine glass particles. Read More