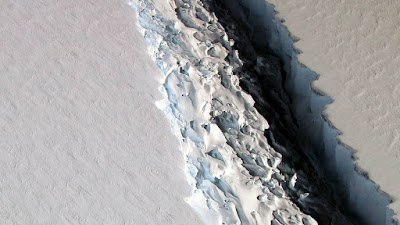 [Mashable] There's a reasonable chance that Antarctica's two most vulnerable ice shelves — the ends of massive glaciers that float over the ocean — will succumb to Earth's warming climate and eventually collapse into the sea.
These particular shelves, known as Larsen C and George VI, are perched on the Antarctic Peninsula — the finger that runs up towards South America. Glacial scientists have now gauged how much oceans would rise if the ice shelves fail, and the news isn't good.
The research, published Thursday in the journal The Cryosphere, shows that taken together, the glaciers' overall contribution to rising seas wouldn't be enormous — adding some 10 millimeters (under half an inch) by the end of the century.
But their collapse is a harbinger of what's to come: The Antarctic coasts are covered in ice shelves, and if they begin to collapse, rivers of ice, or glaciers, will be unleashed into the ocean, boosting sea levels even more.
The shelves act as formidable "plugs," holding back thick masses of Antarctic ice from flowing into the water.
"These are just the two ice shelves considered to have the greatest risk of collapse at present," Nicholas Barrand, a glaciologist and study coauthor, said over email. "There are many, many more ice shelves in Antarctica, and many of them are much, much larger."
In 2002, an ice shelf the size of Rhode Island, Larsen B (just north of Larsen C), crumbled into the ocean and broke apart. Read More

[TIME] As a record-breaking heat wave scorches Sweden, dozens of wildfires are raging in parts of the country.
According to local media, at least 40 fires were burning in parts of Sweden on Wednesday, which have prompted evacuations from three Swedish counties. The Guardian says that 11 of the fires are inside the Arctic Circle.
Italy has sent two planes and Norway eight helicopters to assist in firefighting efforts, but Sweden’s Civil Contingencies Agency has appealed to the E.U. for more aerial assistance, saying the fires were the worst in modern times.
“This is definitely the worst year in recent times for forest fires,” Mike Peacock, a university researcher and local resident told The Guardian.
The fires are happening alongside a heatwave that has been plaguing Northern Europe all summer, causing record-breaking highs across Scandinavia.
One village just north of Sweden’s Arctic Circle, Kvikkjokk, hit just above 90 degrees Fahrenheit.
Downtown Helsinki, Finland’s capital, hit 86 degrees Fahrenheit for the first time in eight years, the Weather Channel reports.
Bardufoss, a town in northern Norway, hit an all-time record when temperatures soared to 92.3 degrees on Wednesday.
According to the National Oceanic and Atmospheric Administration, continental Europe has had its warmest May and second-warmest June since 1910.
at July 19, 2018