Something Prophetic is Happening in California!

Email ThisBlogThis!Share to TwitterShare to FacebookShare to Pinterest
Labels: Time of Change, Wildfire

What Happens After You Die? The Evidence for Rebirth

[AppleNews] On March 3, 1945, James Huston, a twenty-one-year-old U.S. Navy pilot, flew his final flight. He took off from the USS Natoma Bay, an aircraft carrier engaged in the battle of Iwo Jima. Huston was flying with a squadron of eight pilots, including his friend Jack Larsen, to strike a nearby Japanese transport vessel. Huston’s plane was shot in the nose and crashed in the ocean.
Fifty-three years later, in April of 1998, a couple from Louisiana named Bruce and Andrea Leninger gave birth to a boy. They named him James.
When he was twenty-two months old, James and his father visited a flight museum, and James discovered a fascination with planes—especially World War II aircraft, which he would stare at in awe. James got a video about a Navy flight squad, which he watched repeatedly for weeks.
Within two months, James started saying the phrase, “Airplane crash on fire,” including when he saw his father off on trips at the airport. He would slam his toy planes nose-first into the coffee table, ruining the surface with dozens of scratches. James started having nightmares, first with screaming, and then with words like, “Airplane crash on fire! Little man can’t get out!”, while thrashing and kicking his legs.
Eventually, James talked to his parents about the crash. James said, “Before I was born, I was a pilot and my airplane got shot in the engine, and it crashed in the water, and that’s how I died.” James said that he flew off of a boat and his plane was shot by the Japanese. When his parents asked the name of the boat, he said “Natoma.”
When his parents asked James who “little man” was, he would say “James” or “me.” When his parents asked if he could remember anyone else, he offered the name “Jack Larsen.” When James was two and a half, he saw a photo of Iwo Jima in a book, and said “My plane got shot down there, Daddy.”
When James Leninger was eleven years old, Jim Tucker came to visit him and his family. Tucker, a psychiatrist from the University of Virginia, is one of the world’s leading researchers on the scientific study of reincarnation or rebirth. He spent two days interviewing the Leninger family, and says that James represents one of the strongest cases of seeming reincarnation that he has ever investigated.
“You’ve got this child with nightmares focusing on plane crashes, who says he was shot down by the Japanese, flew off a ship called ‘Natoma,’ had a friend there named Jack Larsen, his plane got hit in the engine, crashed in the water, quickly sank, and said he was killed at Iwo Jima. We have documentation for all of this,” says Tucker in an interview.
“It turns out there was one guy from the ship Natoma Bay who was killed during the Iwo Jima operations, and everything we have documented from James’ statements fits for this guy’s life.” Read More
at November 07, 2018

Giant 'waves' in the sky wreak havoc on our weather, study says 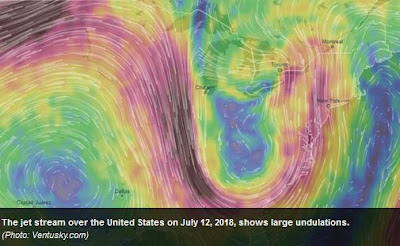 [USA Today] Giant waves up there in the atmosphere have a huge influence on our weather down here.
The waves aren't water, they're strong "jet stream" winds that a new study says act strangely because of human-caused global warming. This, in turn, appears to cause more wild and extreme summertime weather for us Earthlings – and could increase in the decades ahead.
In summer 2018, for instance, impacts on extreme weather due to the weird behavior of jet stream winds were felt worldwide, according to study lead author Michael Mann of Penn State University.
"It played out in real time on our television screens and newspaper headlines in the form of an unprecedented hemisphere-wide pattern of extreme floods, droughts, heat waves and wildfires," Mann said.
What's happening, on a very basic level, is that unusual warmth in the Arctic causes jet streams – the rivers of air in the atmosphere that push and pull our weather around – to slow down, stall or meander in strange ways. When the undulations of the jet stream lock in place, weather systems can be trapped and cause havoc down here.
"If the same weather persists for weeks on end in one region, then sunny days can turn into a serious heat wave and drought, and lasting rains can lead to flooding," said study co-author Stefan Rahmstorf of the Potsdam Institute for Climate Impact Research in Germany.
The extreme and unusual jet stream patterns – known technically as "quasi-resonant amplification" – could increase by as much as 50 percent by 2100, the study said.
A wild card in this theory is that another human-caused ingredient – air pollution – could actually counteract the impact of global warming on our atmosphere. This happens because the pollutants reflect sunlight back into space, keeping Earth cooler.
Daniel Swain, a climate scientist at UCLA and the National Center for Atmospheric Research who was not involved with the new research, told Inside Climate News the study has some "compelling new evidence on the link between amplified Arctic warming and extreme mid-latitude weather during the summer months."
As far as what to do about our warming planet, the song remains the same: "The future is still very much in our hands when it comes to dangerous and damaging summer weather extremes," Mann said. "It's simply a matter of our willpower to transition quickly from fossil fuels to renewable energy."
The study appeared in the journal Science Advances.
at November 07, 2018

Email ThisBlogThis!Share to TwitterShare to FacebookShare to Pinterest
Labels: Above and Beyond, Anthropogenic Climate Disruption, Global Warming 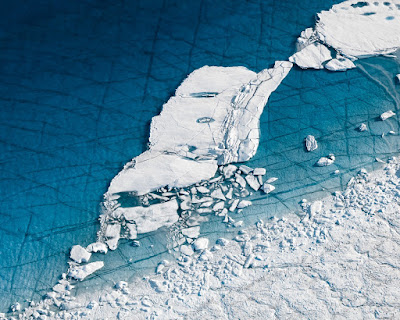 [My Modern Met] Aerial photographer Tom Hegen has dedicated his career to exposing how man has shaped the environment, and not always for the best. From engineered salt ponds to industrial tulip fields, these habitats are at once beautiful and frightening when one reflects on the consequences. It’s these consequences that are the focus of Hegen’s new series, titled two°celsius, which sees him taking flight over the Greenland Ice Sheet.
This vast body of ice, which covers about 80% of Greenland’s surface, is vulnerable to climate change and is already beginning to melt. Scientists predict that a 2 degree Celsius rise would completely melt Greenland’s ice, which would cause a global sea level rise of 24 feet (7.2 meters). With so much being said about the dangers of the Earth’s temperatures rising by 2 degrees Celsius, Hegen set out to get a first-hand look at the impact of mankind’s industrialization.
The resulting photos are deceivingly beautiful until one realizes that the turquoise that increasingly invades the photographs is only present due to rising temperatures and melting ice. Flipping from a nearly white, icy environment to a completely blue surface is a shocking reminder that global warming isn’t an abstract concept of the future, but a concrete reality of today.
We recently spoke with Hegen about his firsthand experience in Greenland and why he feels so strongly about using his art to raise awareness about how humans are shaping the environment. Read on for our exclusive interview.
It all started when I visited an exhibition back in 2015 about the suggested term Anthropocene. It’s a proposed term by a board of scientists for a new human area. Scientists around the world are recognizing that we as humans have such a strong impact on the geological, ecological, and atmospheric processes on earth that we have become the most impacting force on our planet. I wanted to access this topic with my own visual language and to start drawing attention to environmentally relevant issues to hopefully inspire people and to make a difference to our planet.
I also started to question the term “landscape” as known in landscape photography. “Land” is actually a word of Germanic origin and the roots of the suffix “-scape,” (schaffen in German), refers to the verb “shaping.” So landscape in a sense of landscaping refers to an activity that modifies the visible features of an area. As a consequence of that, I started seeing landscape photography as documenting places influenced by humans rather than landscape photography as showing pure, unspoiled nature. Read More and See Photographs
at November 07, 2018

[Stranger Dimensions] The number of reported UFO sightings is seemingly booming, if the Internet is anything to go by. Jump right to this year’s sightings.
Every day, countless videos of unidentified orbs or strange objects in the sky are uploaded online — but with new ways to report and share sightings come whole new levels of hoaxes and fakes. How do we separate the signal from the noise?
We don’t. We just look at the reports we have and decide for ourselves which are the most believable.
According to the National UFO Reporting Center, 2017 brought them 4,655 UFO sighting reports within the United States, down from 2016’s 5,619. How will 2018 fare?
Let’s find out. On this page, you’ll find some of 2018’s more prominent UFO sightings. Some may be hoaxes, some may have ordinary explanations. Perhaps we’ll catch a few that are truly out of this world.
On June 21, 2018, WKBW TV out of Buffalo, New York shared this curious find during their local weather forecast.
Meteorologist Autumn Lewandowski spied something interesting on one of their time-lapse cameras, while filming the horizon: a bright orb of light, that eventually shot off toward the camera and out of view.
On July 7, a family spotted a black, cigar-shaped UFO in the skies over Banbury, Oxfordshire in the UK.
The object had a very narrow cylindrical shape and at times appeared to either be reflective or give off its own light (at approx. 1:03 in the video, you can see light move from the bottom up over the surface of the object).
According to the uploader, the object “was pretty much holding position” despite moving clouds and a decent wind. This, he says, possibly counters the idea that it was a solar balloon, though many believe this to be the case. Near the end of the sighting (which does not appear in the video), the object “climbed rapidly at a near vertical angle until it was no longer visible.”
What’s more, before the witness could get his actual camera to record clear footage, the object could be seen “flashing and rotating.”
A Peruvian UFO hunter spotted an unidentified object, known as an OVNI in Spanish, hovering over the famous Nazca Lines on the evening of June 9.
The footage, uploaded on June 27 by the Peruvian Association of Ufology, shows a dark, and strangely unmoving, oblong object in the sky. The video’s description says it was “completely static” and likens its shape to a zeppelion.
“Are we facing the manifestation of a UFO on the Nazca Lines?” they ask. Read More

Email ThisBlogThis!Share to TwitterShare to FacebookShare to Pinterest
Labels: Above and Beyond, Time of Change
Newer Posts Older Posts Home
Subscribe to: Posts (Atom)