[Komilla Sutton] The eclipse is at 9º58 Sagittarius Mula Nakshatra. The first location to see the start of the full eclipse is at 3:34:33 UTC; the maximum eclipse is at 5:17:46 UTC and the last place to see the total eclipse end is at 7:00:55. The annular phase of this solar eclipse is visible from Saudi Arabia, Southern India (Karnataka, Kerala and Tamil Nadu), North Sri Lanka, Singapore and parts of Indonesia.
This is a significant eclipse and can be a very disruptive influence. Six planets Sun, Moon, Mars, Mercury, Jupiter, Saturn and Ketu are conjoined and it is rare to have six planets together in a sign but even more unusual to have the eclipse at the same time. This is a Ketu eclipse and it can release a lot of tension and stress that has been accumulating over the year.
The eclipse is at 9º58 Sagittarius Mula Nakshatra. Sagittarius is a warrior sign transforming the world from material to spiritual. It will fight for change and does not always care about the cost as old patterns need to break in order that new can manifest. Mula is the root, and it wants to destroy the source of past karma so that the soul can be free.
During the eclipse, all planets are in three signs creating a transit Shula yoga (we do not take Rahu Ketu in this yoga.) Shula yoga is part of the Nabhasa yoga which shows the pattern of planets in the sky. Shula comes crome Trishula – which is the weapon of Lord Shiva. This can be used to destroy ignorance, however, in the wrong hands, it can create pain, sorrow and destruction.
Jupiter is combust by the Sun, so its strength is Sagittarius and wisdom is not present to handle this explosive and unsettled situation. The potential of this eclipse is to make significant changes. Events do not happen on the day of the eclipse, but we can feel the disruptive energy. It is best to keep life simple on 25th and 26th of December and not make any significant decisions. The mind feels very restless and anxious. We should not add to it. As the eclipse passes, you will see the energy dissipating and clarity resuming. Read More
at December 09, 2019

Email ThisBlogThis!Share to TwitterShare to FacebookShare to Pinterest
Labels: Above and Beyond, Time of Change

The Phoenix Enigma: Stargates, Skinwalkers, and The Enchanted American S...

Email ThisBlogThis!Share to TwitterShare to FacebookShare to Pinterest
Labels: Above and Beyond, Ancient History, Time of Change 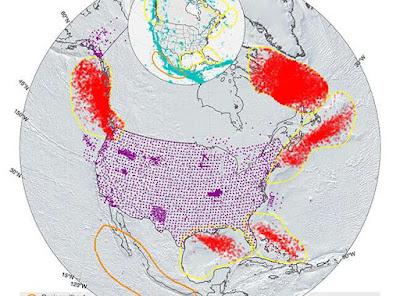 [Pys.org] Stormquakes are a recently discovered phenomenon characterized by seismic activity originating at the ocean floor due to powerful storms.
Catherine de Groot-Hedlin, a researcher at the Scripps Institution of Oceanography at the University of California, San Diego, was part of the group that first observed stormquakes. She will discuss their properties and meteorological significance during a session at the 178th Meeting of the Acoustical Society of America, which will take place Dec. 2-6, at the Hotel del Coronado in San Diego.
The talk, "Stormquakes: Tracing the path of ocean storms through the solid earth," will be presented on Friday, Dec. 6, as part of the session on marine seismoacoustics.
Heavy storms, like hurricanes or nor'easters, can create seismic waves as large as magnitude 3.5 quakes. These tremors caused by the effects of storms on the seafloor are what de Groot-Hedlin and her collaborators call stormquakes. An equivalent earthquake would be large enough to generate noticeable indoor shaking.
The track of the storm and the depth of the ocean at its location are key factors in determining whether a stormquake occurs.
"Most hurricanes we studied were strong as they passed north along Georgia to New Jersey but weakened into category 1 or even tropical storms by the time they hit offshore New England," said de Groot-Hedlin. "Despite this, stormquakes were only detectable off the coast of the New England region and Georges Bank, when the storms were weaker."
On the other hand, the storm's intensity does not play a critical role, though it must be strong enough to be able to transfer a certain amount of energy into the ocean. This energy transfer leads to strong pressure zones at the interaction between ocean waves and ocean banks. Read More
at December 07, 2019