About Most Holy Trinosophia – Natural Initiation – Origins of This Mystery Book 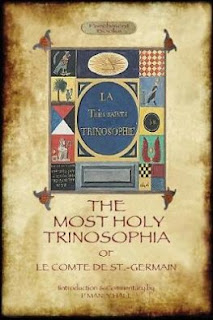 [Simona Rich] The Most Holy Trinosophia is the only known mystical writing of the Comte de St. Germain. There are more books attributed to him, but it’s unlikely that he wrote them. Authors might have borrowed his name in order to make books more popular, though I don’t discount the possibility of him writing more than one book.
This book is one of the most extraordinary document relating to the Hermetic Sciences ever compiled. It was left by St. Germain before his disappearance. In the manuscript it is told that he was captured and kept in the dungeon by the Inquisition of Rome, and it is written that he didn’t die there but, with the help of an angel, was freed.
Very little is known how manuscript changed hands. This manuscript once belonged to the magician Cagliostro, who took it with him when he traveled to Rome. Unfortunately, he was incarcerated in the Castle San Leo and the Inquisition seized the volume, because, as I told quite a few times, the Vatican was after these magical works as it wanted to destroy all who owned them, and to steal their works so that they hold the monopoly over magic.
There were several copies of the work, and the one that has survived to our days is a copy too, which is obvious from the way that different symbols are drawn, especially letters of different languages. In the work we have an opportunity to get familiar with the esoteric doctrines of St. Germain and his associates. They are revealed in symbols – in pictures and symbolic text. Thankfully, we also have a very able explanation of the symbols found at the end of the book.
Quoting from the introduction of The Most Holy Trinosophia:


The work is of no great length, consisting of ninety-six leaves written upon one side only. The calligraphy is excellent. Although somewhat irregular in spelling and accenting, the French is scholarly and dramatic, and the text is embellished with numerous figures, well drawn and brilliantly colored. In addition to the full page drawings there are small symbols at the beginning and end of each of the sections.
Throughout the French text there are scattered letters, words, and phrases in several ancient languages. There are also magical symbols, figures resembling Egyptian hieroglyphics, and a few words in characters resembling cuneiform. At the end of the manuscript are a number of leaves written in arbitrary ciphers, possibly the code used by St.-Germain’s secret society.

It’s an eighteenth-century work though most of the material belongs to a considerably earlier period. Its title can be translated as “The Most Holy Three-fold Wisdom”. This three-fold wisdom might apply to the three kingdoms found in this world; the mineral kingdom, the vegetable kingdom and the animal kingdom. All these three were intensely studied by the students of the occult.
The title of the book may also suggest that three keys are required to unlock its symbolic pictures and texts. Those who studied this book came to the conclusion that those three keys are likely to be alchemy, Essenian Cabbalism and Alexandrian Hermetism – the mysticism of the later Egyptians. Read More
at January 22, 2020