Who was Baird T Spalding? 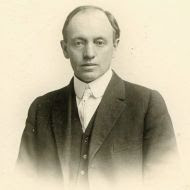 [BairdSpalding.org] Baird Thomas Spalding is the nom de plume of Bayard Spaulding*, an American writer born in 1872 in Cohocton, New York. Spalding self-published Life and Teaching of the Masters of the Far East in 1924 which told of a fantastic research expedition to India and Tibet in the 1890’s that witnessed masters who could perform miraculous feats, imparting simple spiritual truths in a format which appealed to Western audiences.
Spalding’s first book was republished by DeVorss & Co and became a runaway hit, selling many thousands of copies and leading Spalding on lecture tours across America. Spalding continue to write three more volumes of Life and Teaching, and led a small group of followers to India in 1935. He died in 1953 in Arizona at the age of 80.
Spalding’s books and his publisher say he was born in the 1850’s in England, and his father/grandfather was from India. What’s your source for saying otherwise?
Baird T Spalding’s family history has been published here, taken from authoritative sources such as passport records, the US census and Spaulding family obituaries and they are unequivocal.
Spalding had no family connection to India, but he did have a lifelong penchant for tall tales. The biography and timeline provided in the books and on the DeVorss & Co website is primarily based on those tales and is mostly fictional, just like Spalding’s nom de plume.
Are the books fiction or non-fiction? Did Spalding actually go to India in 1894?
Many readers are disappointed when they learn that Spalding did not go to India in 1894, and there was no research expedition as described in Life and Teaching. Spalding was only 22 years old in 1894, and he spent most of the 1890’s in the Yukon mining for gold. Spalding’s first visit to India was in 1935 at the behest of his publisher, after the release of Life and Teaching Volume 3.
Presenting fictional material of a spiritual nature in the style of scientific expeditions to distant lands and discoveries of rare documents was a popular genre around the turn of the century (see Nicholas Notovitch and Edmund Bordeaux Szekely for similar examples). Life and Teaching is a work of fiction in the genre of magical autobiography.
Spalding was a fascinating man who freely mixed fact and fiction in his life, telling stories that varied from one telling to the next. Many of the incredible stories surrounding Spalding were told in a way that helped people to comprehend the spiritual content of his books.
Can I get a map of Spalding’s travels through India, or the names of his companions? What about the location or photographs of the Temple Of Silence, the Healing Temple, or the Temple Of The Great Tau?
Unfortunately, since Spalding did not travel to India as described in Life and Teaching, there is no map, photographs or further information available. Astute readers may notice the books lack any detailed information about locations or people that is typical of scientific expeditions. The journey, researchers and the temples existed only in Spalding’s imagination.
Spalding’s books and his publisher say he studied at Berkeley, Stanford, Columbia and the University of Heidelberg. Is that true?

Spalding did make those claims, but there are no records of him studying at Berkeley, Stanford or Columbia according to University registrars. Since Spalding did not travel to Germany, it is highly unlikely he studied at the University of Heidelberg.
Where did the spiritual content of the books come from?
Much of the content of Life and Teaching was inspired by the New Thought movement. Spalding was a member of a New Thought group in San Francisco during the early 1920’s when he wrote Life and Teaching Volume One and the first chapters of the book were published in the groups magazine. His wife Stella Spalding was an intelligent, University educated woman who helped Spalding greatly when writing the books. Spalding’s publisher Doug DeVorss was raised  in the Unity Church, a New Thought group, and it is likely he had input on the later volumes of Life and Teaching. Read More
at February 09, 2020