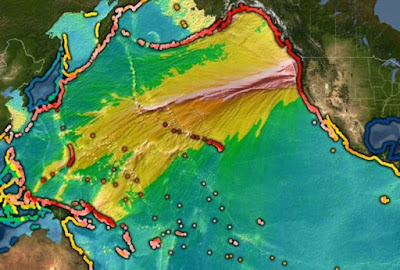 [Geek Wire] Earthquake experts say current building codes don’t reflect the riskiest features of the Seattle area’s geology — but the outlook for survivability looks a lot better if the Really Big One can just hold off for a few more years.
That’s the bottom line from a session focusing on Seattle’s seismic hazards, presented at ground zero today during the American Association for the Advancement of Science’s annual meeting. The session — titled “Is the Coast Toast?” — followed up on a 2015 New Yorker article that painted a grim picture of the possibilities, based on studies of the Pacific Northwest’s Cascadia subduction zone.
The Cascadia subduction zone, centered along a submarine fault just off the West Coast, is known to be capable of generating magnitude-9 quakes, based on the geological and historical evidence for a massive tsunami that reached Japan in 1700.
Seismologists estimate that such quakes and tsunami waves occur roughly every 500 years on average. “We say that there’s approximately a 14% chance of another approximately magnitude-9 earthquake occurring in the next 50 years,” said Erin Wirth, a geophysicist at the University of Washington and the U.S. Geological Survey.
To assess the potential effects of a Cascadia mega-quake, Wirth and other researchers are conducting a six-year, $3 million study known as the M9 Project.
One of the project’s experiments involved running 50 simulations of Cascadia quakes under a variety of conditions. The researchers found wide variation in the effects, depending on whether the undersea fault ruptured in a direction pointing away from Seattle (which would be good) or toward the city (which would be bad).
Another issue has to do with the fact that Seattle is built atop a sedimentary basin with relatively soft soil, which would amplify the strength of a seismic shock.
“A good analogy is, this is like a bowl of Jell-O,” Wirth said. “If you have a bowl of Jell-O, or a Jell-O mold on top of a plate, and you shake that plate, the Jell-O is so weak it’s going to move much more than the plate that you’re shaking. That’s kind of what’s happening here.” Read More
at March 07, 2020