Gardening is Important, But Seed Saving is Crucial 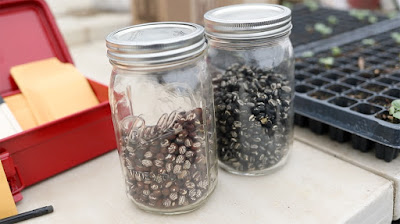 [Apple News] The U.S. is in the midst of a gardening renaissance. As the coronavirus pandemic prompts big questions about the future of our food system, people everywhere are buying up seeds, pulling up lawns, building raised beds, and flocking to learn from Master Gardeners.
Most of these new and seasoned gardeners are making careful decisions about what type of plants they want to grow and how to organize the beds, but it’s also a good time to consider another, perhaps more important aspect of food sovereignty: what kind of seeds you’re planting and whether or not you’ll be able to save and share them next year.
To save seeds is to preserve food culture. Heirloom crops wouldn’t exist if it weren’t for the gardeners who meticulously grew and saved seeds including the Brandywine tomato, Purple Top White Globe turnip, and many other varieties, passing them on to future generations.
In recent years, many Indigenous groups have also used seed saving as a way to preserve their cultures—as well as important crops like Cherokee White Eagle Corn, the Trail of Tears Bean, and Candy Roaster Squash for future generations.
Perhaps most important in this moment, saving (and sharing) seeds also makes sense economically. “People are having a hard time right now financially,” says Philip Kauth, director of preservation for Seed Savers Exchange. But saving seeds is free and many seed libraries, seed exchanges, and other groups offer packets of seeds at prices that are lower than those offered by retail seed companies. “There are so many economical aspects to it. You don’t have to buy seeds every year and you don’t have to buy produce, depending on the time of the year.”
“In the 1930s and 40s, it was popular for home gardeners to save their own seeds,” says Fern Marshall Bradley, author of Saving Vegetable Seeds and an editor at Chelsea Green Publishing. The practice died out but is being revived again by gardeners who want more control (and creativity) with their crops. And it’s easier than it seems to get started. If you’re growing beans, tomatoes, squash, or similar plants you’re already growing seeds. “Why not just take the extra step of saving them?” Bradley says.
Seeds are either open-pollinated or hybrids. The latter are often bred for specific traits like drought resistance or large yields, but you can’t save the seeds. Unlike open-pollinated seeds which can be collected and replanted year after year to get the same tomatoes or lettuce as the year before, hybrids are patented and have been bred to grow just once. Technically, you can save the seeds, but they won’t don’t grow true to type, meaning you’re likely a plant that produces very different food the second time around (if the seeds grow at all).
Beginning with the 1970 Plant Variety Protection Act (PVPA), which granted companies a certificate ownership of seeds, and the 1980 Supreme Court case Diamond v. Chakrabarty, which allowed seeds full patent protection, seed ownership began to look more like intellectual property law. In many cases, farmers were no longer allowed to save seeds and breeders couldn’t use patented seeds to breed new plant varieties either. Today, the bulk of seed breeding has moved from public universities to private laboratories and four companies control more than 60 percent of global seed sales.
“Farmers no longer buy seeds,” says Jack Kloppenburg, a sociologist and author of First the Seed. “They rent that seed from Monsanto or Syngenta,” he explains referring to the trend that has overtaken many commodity crops like corn, soy, or cotton. Rather than growing a number of open-pollinated seeds that are bred to thrive in a particular climate or soil conditions, farmers throughout the world are turning to a few conglomerates to buy the same seeds and grow the same cash crops as the rest of the world. Read More